Apart from a few beloved local restaurants (Bufi, Indian Rasoi, Table du Marché…), there aren’t many places I’ve visited 3 times. So when my sister-in-law suggested Duck & Waffle for dinner, I was disappointed; it’s not that I hadn’t enjoyed it on previous occasions (incidentally, it was my first review), but my restaurant list isn’t getting any shorter. Furthermore, she, Chef Savla and I had already been, but she wanted to introduce her boyfriend to the D&W club. We therefore booked our table nice and early, only for him to be struck down with an eye infection on the day. After checking he was OK, we decided to stick to our plans. 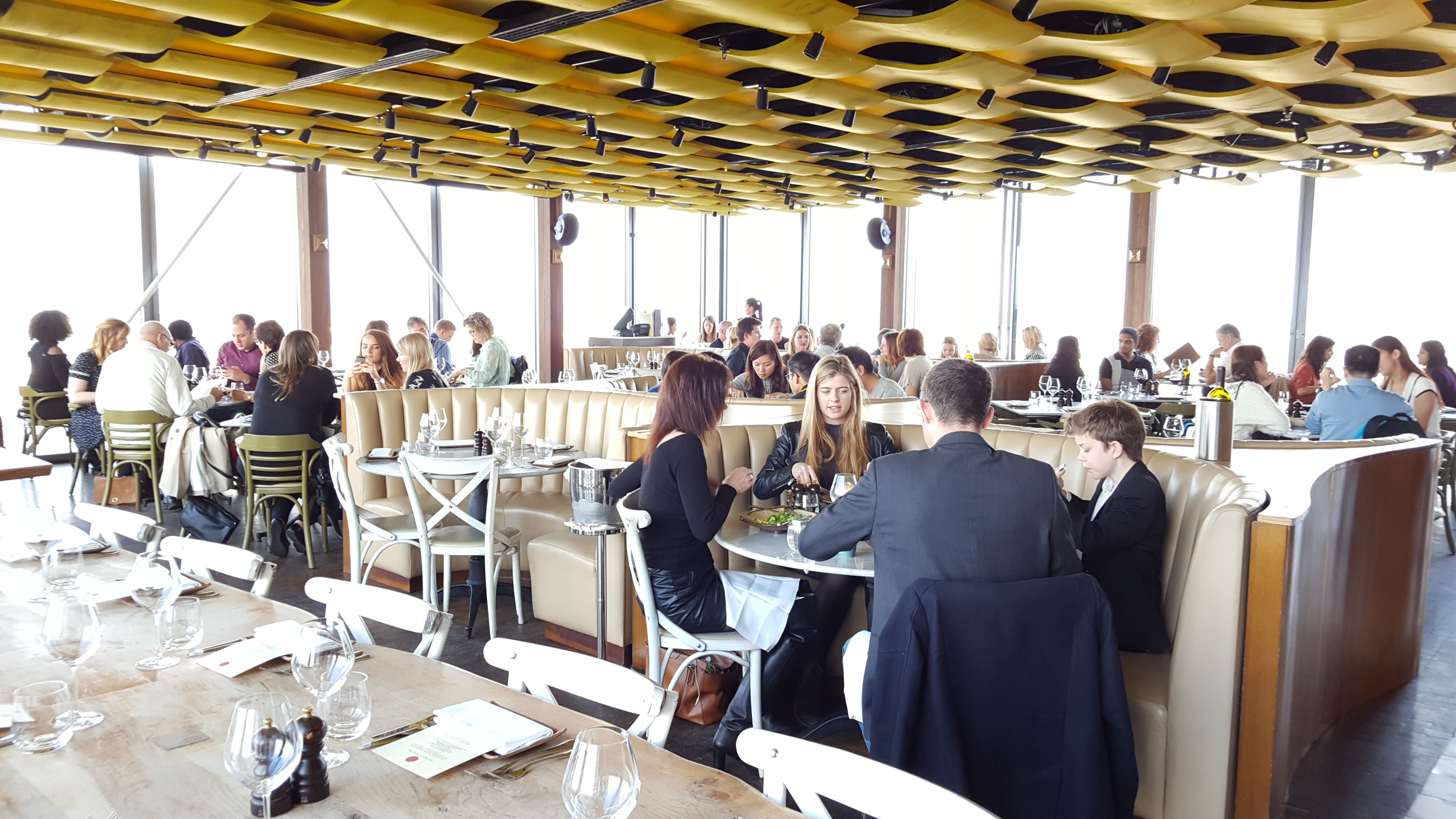 Photos of the stunning views from the lift, bar and restaurant are splashed all over social media, with some of the best taken by Executive Chef, Dan Doherty. Having been at night, in cloudy conditions and on a sunny day, D&W’s aesthetic appeal gets full marks. The interior is simple sophistication, and flooded with natural light, with the beige leather booths, white and olive chairs and light marble tabletops complementing the view, not distracting from it. The wave-shaped sun-yellow panels on the ceiling add a dash of vibrancy, as does the open kitchen.

We arrived separately and were welcomed very differently. While Miss Savla and I were greeted warmly, Chef Savla was left fuming. Having walked from East Finchley to the City to train for his upcoming 200-mile Coast 2 Coast challenge, he was distracted with his backpack and got off at Sushi Samba on the 38th floor. The host assured him that he could take the stairs, but when he arrived, he was met by a stony-faced hostess who reluctantly ushered him in. Since he was early, he asked a barman if he could take a seat and was shown to a space reserved for restaurant diners. On seeing him in a reserved area, the hostess re-appeared to move him along, her tone increasingly aggressive. He calmly informed her that her colleague had advised him to wait there for us, but her arrogant attitude left a sour taste in his mouth. Service improved considerably at the table, and many thanks to Philip and Chris for rescuing the situation by advising us on the menu, sharing their favourites and returning to check on whether we liked our dishes.

A bottle of Primitivo took the edge off Chef Savla’s bad mood as we settled in. Between the three of us, we’d already sampled a lot of the dishes on earlier visits, so our strategy was to combine the favourites with something new. The Spicy Ox Cheek Doughnut was first up and is still a winner: strips of spicy meat in a sweet and smoky fluffy ball served on a palatable puddle of apricot jam. I’m as much a fan of the sweet-savoury theme as ever, although I felt there was less meat this time around. The Violet Artichoke and Parmesan bread was subtle and soft, and perfect for mopping up the sticky remnants.

From the snacks menu, we tried BBQ-Spiced Crispy Pigs’ Ears* and Bacon-Wrapped Dates* for the first time, the latter being more memorable than the salty crisps for their meaty earthiness, accompanied with a dollop of mustard to offset the sweetness.

*Compliments from the kitchen. 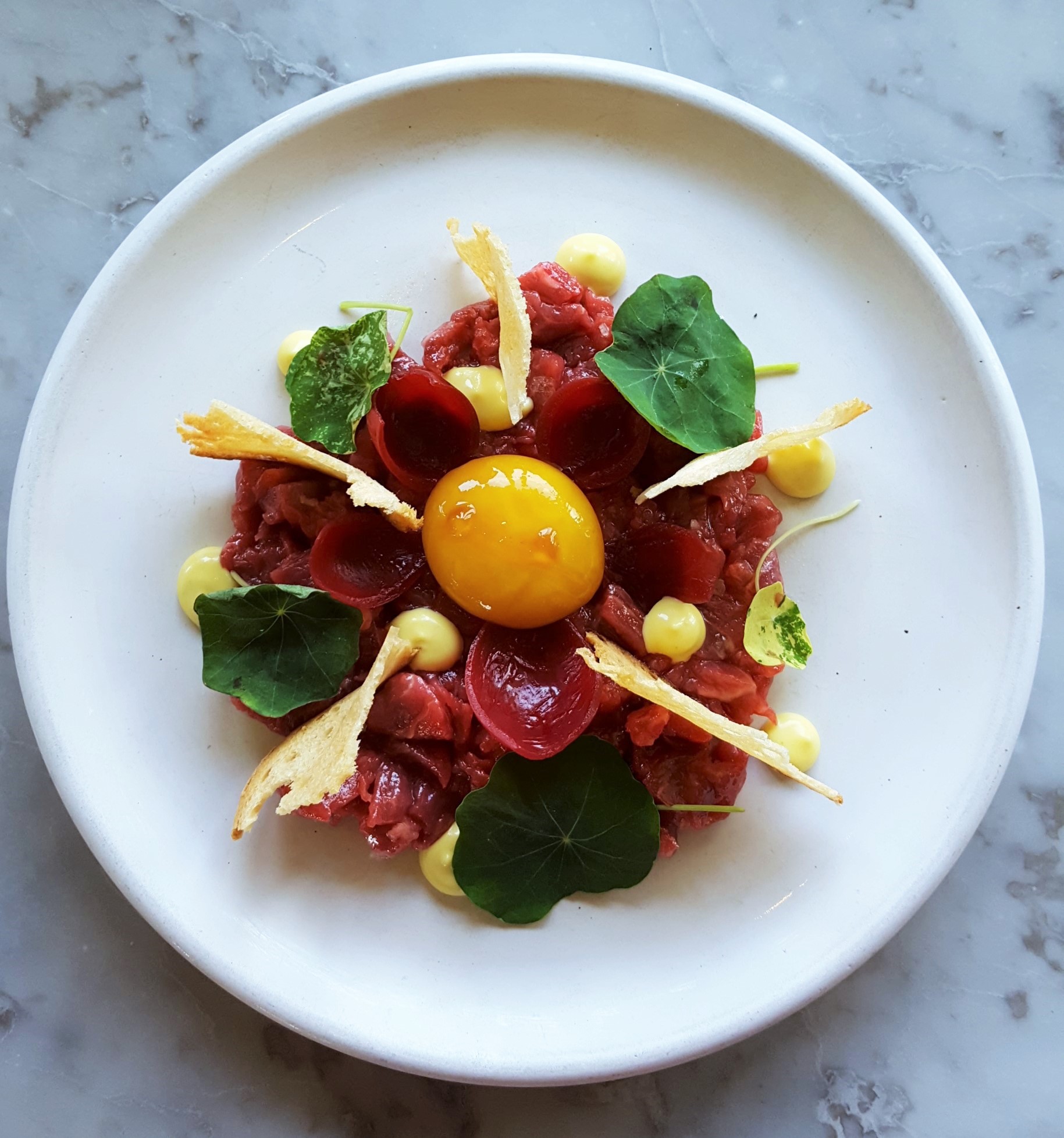 Angus Beef Tartare wasn’t on the menu last time, and an inevitable choice for me. Instead of a minced patty, this contemporised classic has larger pieces of meat paired with ruby-red pickled onion, dripping croutons, dots of mustard and an egg yolk. This yolk was the gift that kept on giving, spilling over the beef and upping the richness factor. It tasted luxuriously smooth in contrast to the crunchy croutons. As this was my ultimate #foodporn moment, Chef Savla and his sister had a few bites and kindly let me finish it.

We’d shared one of everything until now, but wisely went for two portions of the signature Duck & Waffle. As always, it’s a stack of saliva-inducing deliciousness; what’s not to love about a fresh waffle, confit duck leg and fried duck egg drenched in mustard maple syrup?

I’d gone in wanting the Dark Chocolate Brownie Sundae, but somehow persuaded the table to order Torrejas. No complaints, though: we loved the warm, slightly firm apples, coated in a maple and caramel sauce and the cinnamon ice cream, which soaked into the caramelised bread as it melted.

Third time wasn’t quite a charm to start; all guests should be treated with respect unless they give cause to act otherwise. Service issues aside, the quality of the food is consistently high, and the kitchen skilfully produces dishes which spoil the eyes and taste buds alike. It’s a beautiful space for all occasions, from breakfast meetings and romantic dinners, to weekend brunches and family lunches. D&W never sleeps, so if you ever have trouble doing so, or feel peckish in the late/early hours, you can always fill your belly here, albeit from a reduced menu.