The Adelaide Street branch is the middle child of the Barrafina family, headed by restaurateur brothers Sam and Eddie Hart, who also brought us Fino (now closed) and Quo Vadis. Its location makes it ideal for pre- and post-theatre dining, unless you arrive 5 minutes after it opens for dinner and the estimated wait time is 1 hour. But since I’d been raving about the tuna tartare at the Soho sibling (link below), Chef Savla was willing to wait and see what the fuss was about.

Being on the corner makes the restaurant seem spacious, and the cream counters floor tiles, white walls and strategically placed mirrors enhance this effect. Conversations were in full flow around us without being distractingly loud, creating a nice early evening buzz. We perched in an alcove opposite the counter, which gave us a good preview.

Drinks and snacks were quickly offered by the chatty and friendly staff, who regularly updated us on the remaining wait time. Once we’d grabbed 2 coveted stools, we asked the chefs for their recommendations and some questions on the various ingredients, all of which were happily answered. Unfortunately, the tuna tartare is only available on the Frith Street menu, but this just means I’ll have to go back, which is no chore quite frankly.

Sharing a bottle of red (Los Trovadores, Grenache, Montsant, Karma de Drac, 2013) was a good way of passing the time, as was nibbling on crab croquetas. These were a lot tastier than the usual ham and cheese versions, and this is coming from someone who doesn’t really like crab. The coating also deserves a special mention for being thin and crisp; our palates therefore didn’t get clogged up with excess batter and we could fully appreciate the delicate crab flavour.

The arroz de marisco (seafood risotto) went down a treat with both of us. Squid is so often overcooked, making it chewy and rubbery, but these generous pieces were unbelievably soft, then paired with juicy mussels nestled on gooey, tomato-y rice.

The photo doesn’t do this bocadillo de calamar encebollado (calamari and onion sandwich) justice by half. When you bit into it, you got slight crunchiness from the warm toasted bun, juiciness from the squid then a hint of sweetness from the caramelised onions; a very satisfying combination. In contrast, the thin fries were a decent accompaniment, but I would’ve easily passed on these as I’m not a big fan, preferring normal fries or chips. 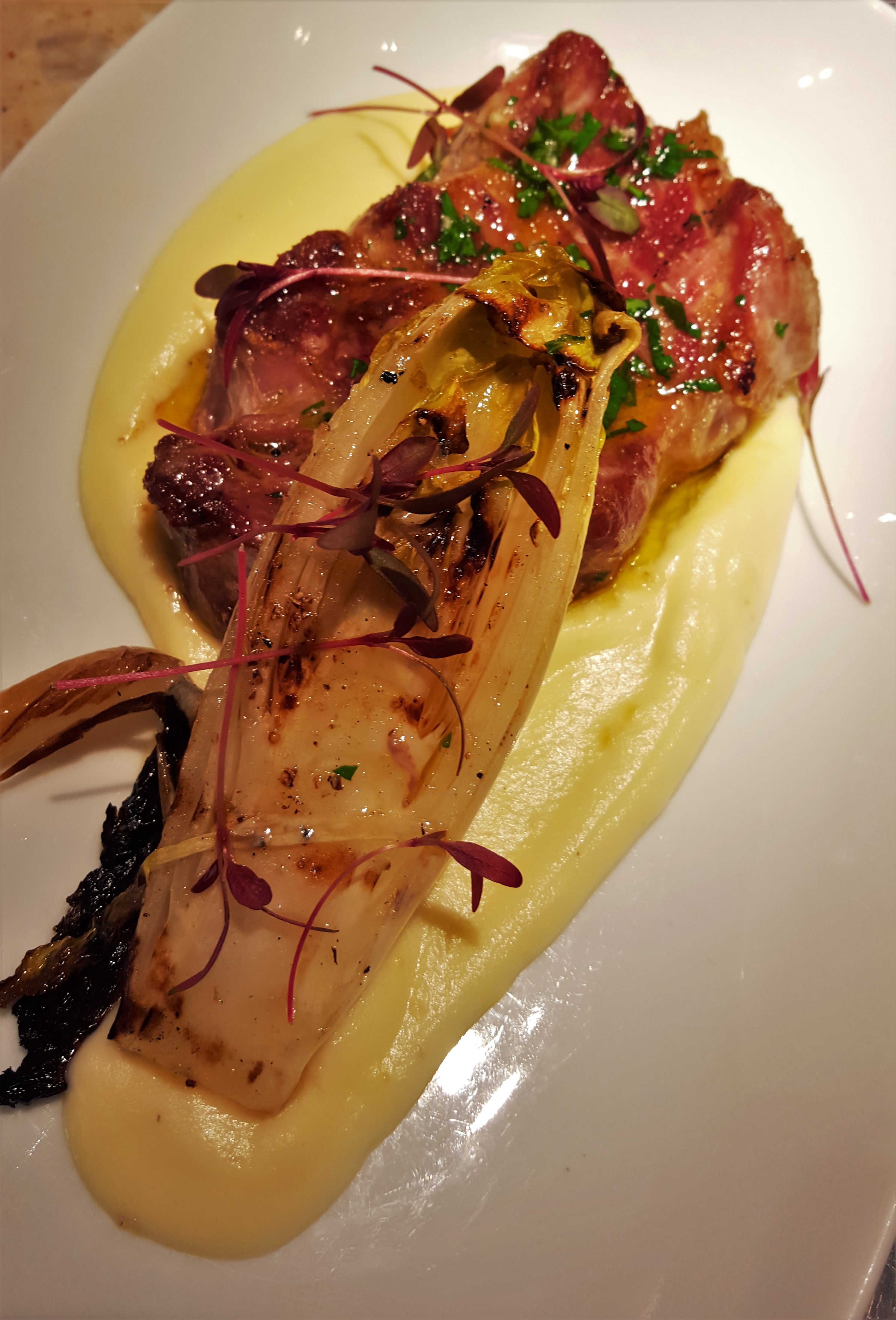 We’d unintentionally saved the best for last with the Basque pork collar dish from the specials menu. Chef Savla once again used his powers of persuasion to get my approval and I’m so glad that he persevered. The meat was served on celeriac puree, together with grilled chicory, the smokiness of which delicately cut through the fattiness of the pork. The puree was so smooth that it was almost like a sauce, adding the final flourish.

Having to queue for so long is frustrating, even with good company, but this becomes a distant memory once you have your first bite. The flavour profiles were well balanced, so each dish was impressive, unlike my last visit where there was only one standout. The restaurant may have been very busy and space limited, but the front of house staff never came across as flustered or annoyed. As seating is at the counter (unless you’re in the private dining room downstairs), it’s best to go as a pair; three is fine, but the second person is guaranteed to have a sore neck later from all the twisting and turning. Last word: try to get there early, otherwise wear comfortable shoes.