It’s hard not to get caught up in the hype surrounding a restaurant, especially if the feedback is overwhelmingly positive. Honey & Co has been on my “to visit” list for longer than I care to remember, and given that it’s a stone’s throw from Warren Street, a short journey from mine, I really don’t have any excuses. So, one Friday evening, fed up of my procrastinating ways, I spontaneously booked a table for Chef Savla and I the following day for dinner. To say I was excited about finally tasting the Middle Eastern cuisine of creative couple Itamar Srulovich and Sarit Packer was an understatement, and knowing that the former was previously head chef at Ottolenghi while the latter was their head of pastry then executive head chef at NOPI had my expectations soaring skywards.

The façade is very pared down; white with a splash of royal blue in the awning, in the corner of which their logo sits discreetly. This minimalism continues inside with bare walls, the only colours coming from the eponymous recipe books dotted around then the jars of preserves near the entrance. But who needs plush décor when the spicy aromas that welcome you have you salivating before you’ve even clapped eyes on the menu?

The compact dining space seats around 20 people, with some stools along the window. The tables are so close that we were privy to our neighbours’ conversations, which, being of a curious nature, didn’t bother me, but another establishment might be more suitable if you’re after a tête-à-tête.

The waitresses personified friendliness, which isn’t as commonplace as it should be. We were greeted with a smile as they explained the menu, suggested alternatives if our expressions betrayed us and then returned to make sure we were satisfied. The only issue we faced, albeit minor, was that since space is so limited, it felt like we were stuck in a game of musical chairs/tables: ours was moved aside during our meal to make room for other diners, then several others were rearranged to accommodate a hen party of 10. However, their group had unexpectedly grown by 2, meaning the tables were split again because the ladies would be taking our tables eventually.

Our breakfast and lunch had been uncharacteristically light that day to ensure our stomachs didn’t surrender halfway through. It was a tough decision between the spring set menu (£26.50 for luxury mezze plus main, or £29.50 for 3 courses) and à la carte, but the latter was victorious. 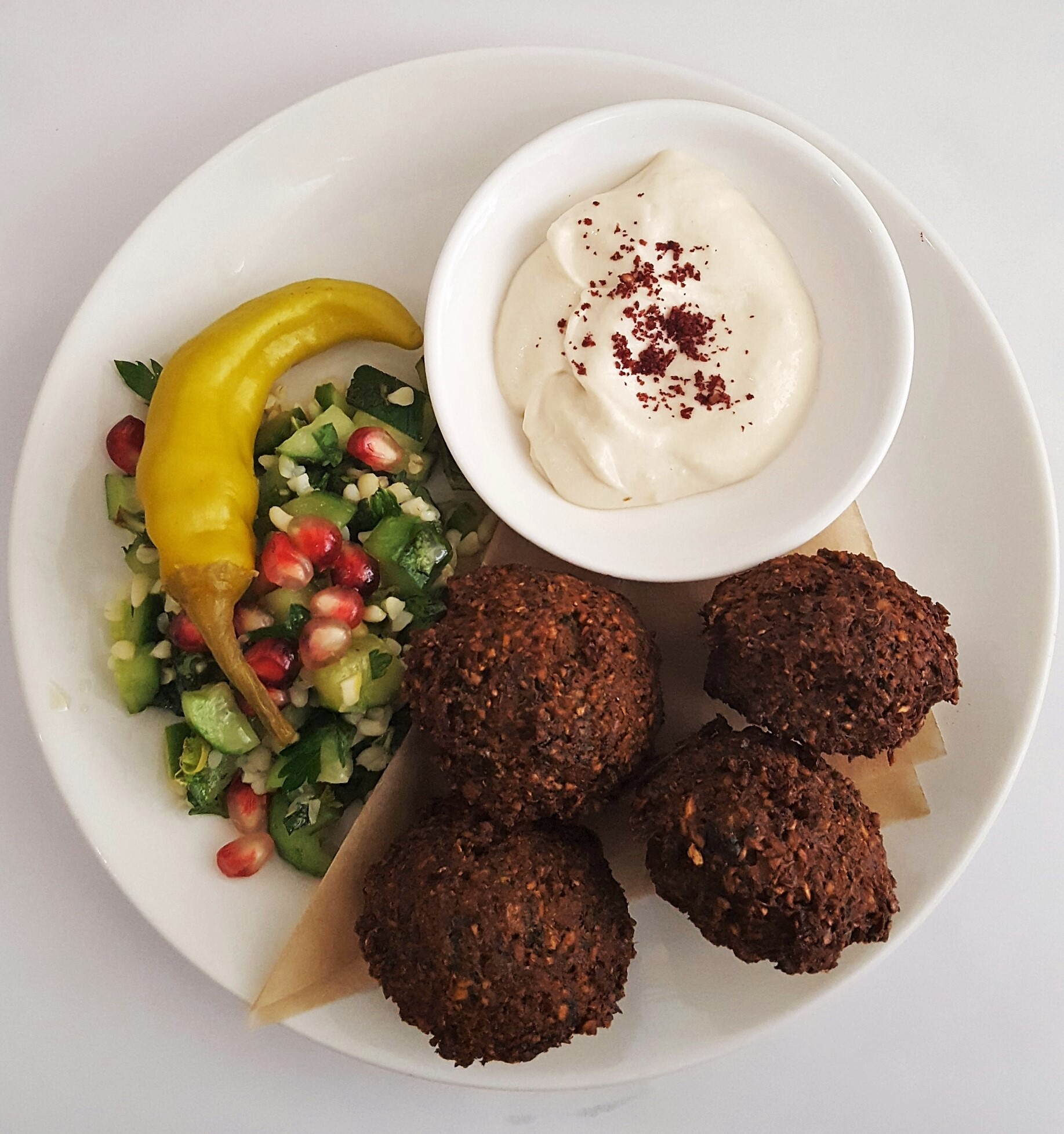 Starters were Yemeni falafel with a cucumber tabule and tahini and Ramson leaf labeneh with a courgette, currant and pine nut salad. My relationship with falafel is somewhat rocky, my experience being almost entirely restricted to packet-made versions or tofu substitutes. These memories were dampened after my first bite: crunchy coating encasing a super soft, vivid green filling flecked with coriander and subtle hints of cardamom. They were served with pomegranate seed-studded cucumber cubes and a smooth tahini, which I loved as it was, but Chef Savla found a touch too heavy.

The labeneh was the culinary equivalent of Boris Becker: a wild card that went on to dominate the tournament. Served on a pile of colourful vegetables that tasted as sweet and fresh as they looked, the spherical strained yoghurt was thick in texture, creamy and delicately herby, and quickly scooped onto the crisp breads and devoured.

These vegetarian dishes had set the scene well and now we were ready for the meaty mains: the lamb mechoui followed by the lamb siniya. The former was like spring had sprung all around the spice-roasted meat thanks to the radish, broad beans, mint and chilli. The mashawa matched the earthy spices in the lamb well, and their softness was offset by the raw salad.

As for the siniya, it sounded, looked and tasted very similar to Chef Savla’s beloved Turkish iskender. Instead of being roasted, the lamb is baked with spices then covered with a tahini and yoghurt dressing, and combining the two with pieces of warm pitta was heavenly. To balance the richness, the meat was accompanied by a chilli-topped tomato salad. 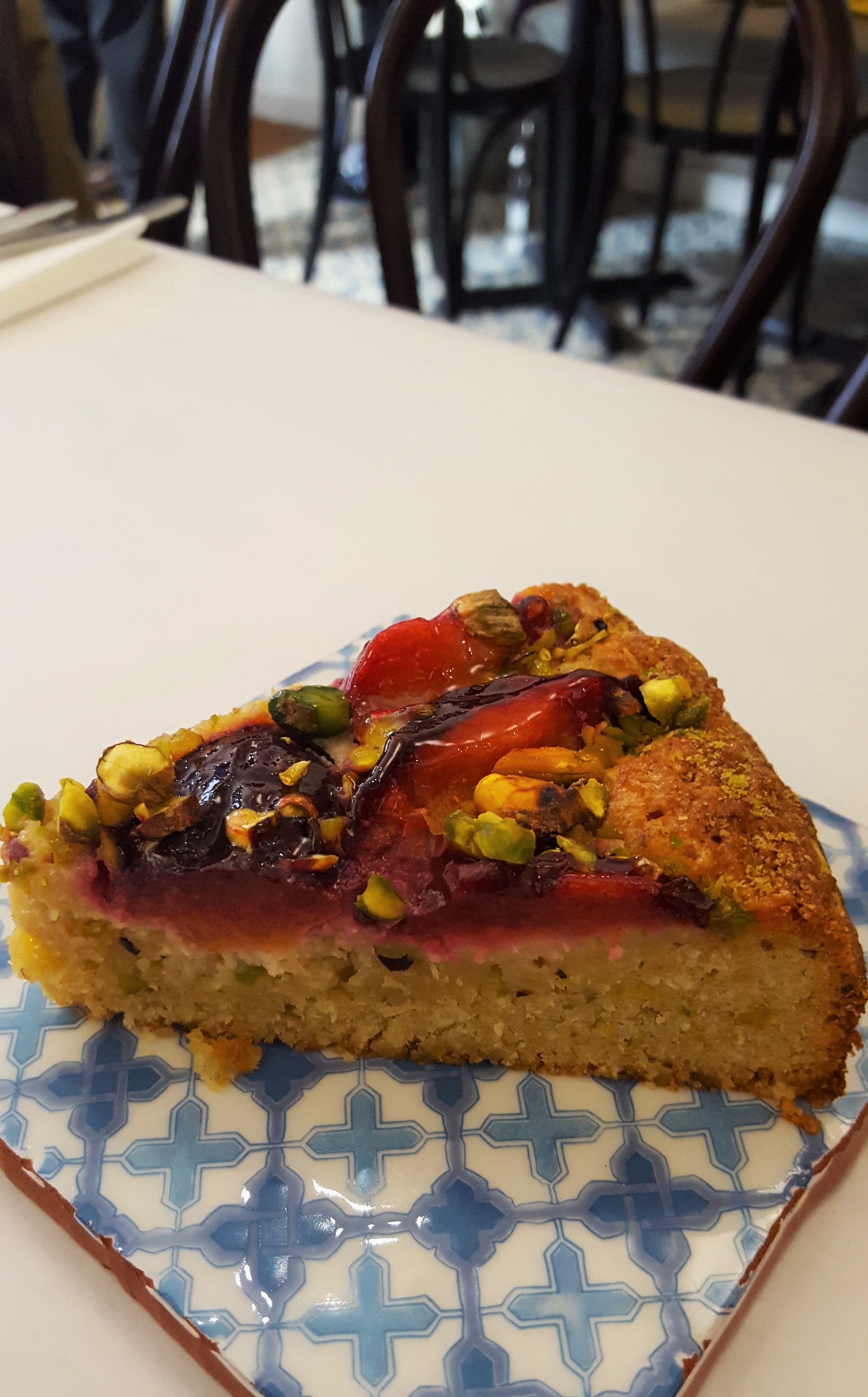 The reputation of Honey & Co’s dessert counter precedes it, and since a mixed plate of all cakes, loaves, cheesecake and biscuits wasn’t on offer, we settled for a slice of chocolate, cinnamon and hazelnut babka and plum, pistachio and almond cake. The differences between the two were like night and day: if the babka was akin to the intensity of a couple’s honeymoon period, the fruit and nut cake was like receiving something you’d briefly mentioned in conversation as a present months later, completely unprompted. Just one gripe: eating off small tiles was impractical, so the table also got fed.

We had a hunch we’d like the food as soon as we inhaled the spicy air on arrival. The interior may lack pizzazz, but the ambiance is very homely, making you feel comfortable from the outset. This is due to both the courteous staff and heart-warming flavours, which demonstrate Itamar and Sarit’s skills, passion and flair. Chef Savla and I proudly finished our feast, but had to walk for some time to aid digestion. Still, we didn’t regret blowing our daily calorie count in one meal, and won’t be waiting years until our next visit, not when there’s shakshuka on the brunch menu.