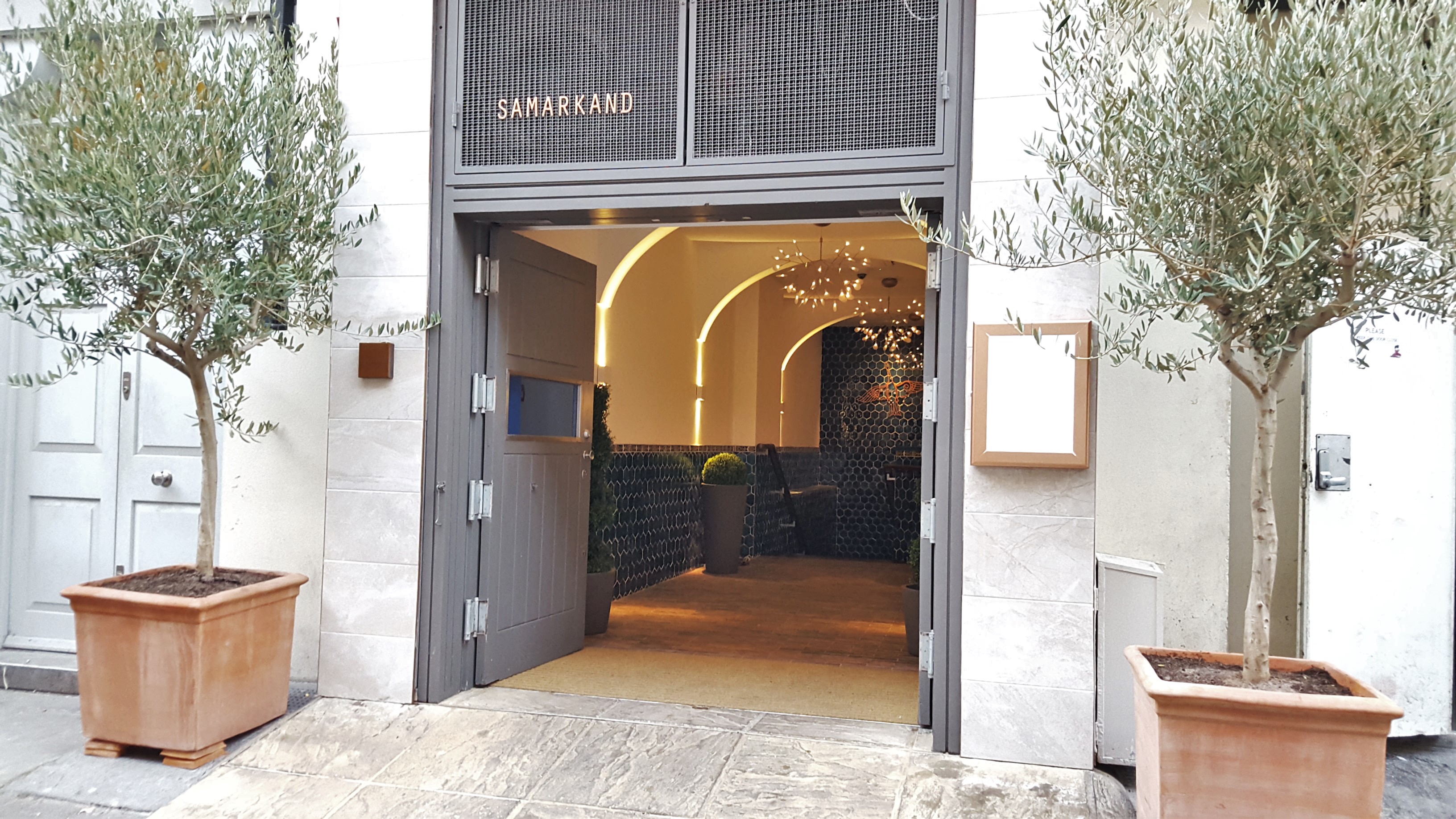 Ever heard of Baklajon, Plov or Shurpa? Unless you’re very au fait with central Asian cuisine, you might assume that these are characters in a new children’s TV programme or the latest breakthrough online game. In reality, these are the names of a few of the dishes on the menu at Samarkand London, which lives on the site formerly occupied by Spanish restaurant Fino on Fitzrovia’s Charlotte Street. Specialising in Uzbeki classics, founder Sanjar Nabiev takes inspiration from his childhood favourites and modernises them to suit an international audience. Having never encountered such food, Chef Savla (CS) and I were very curious to find out more. Samarkand Blogger Review 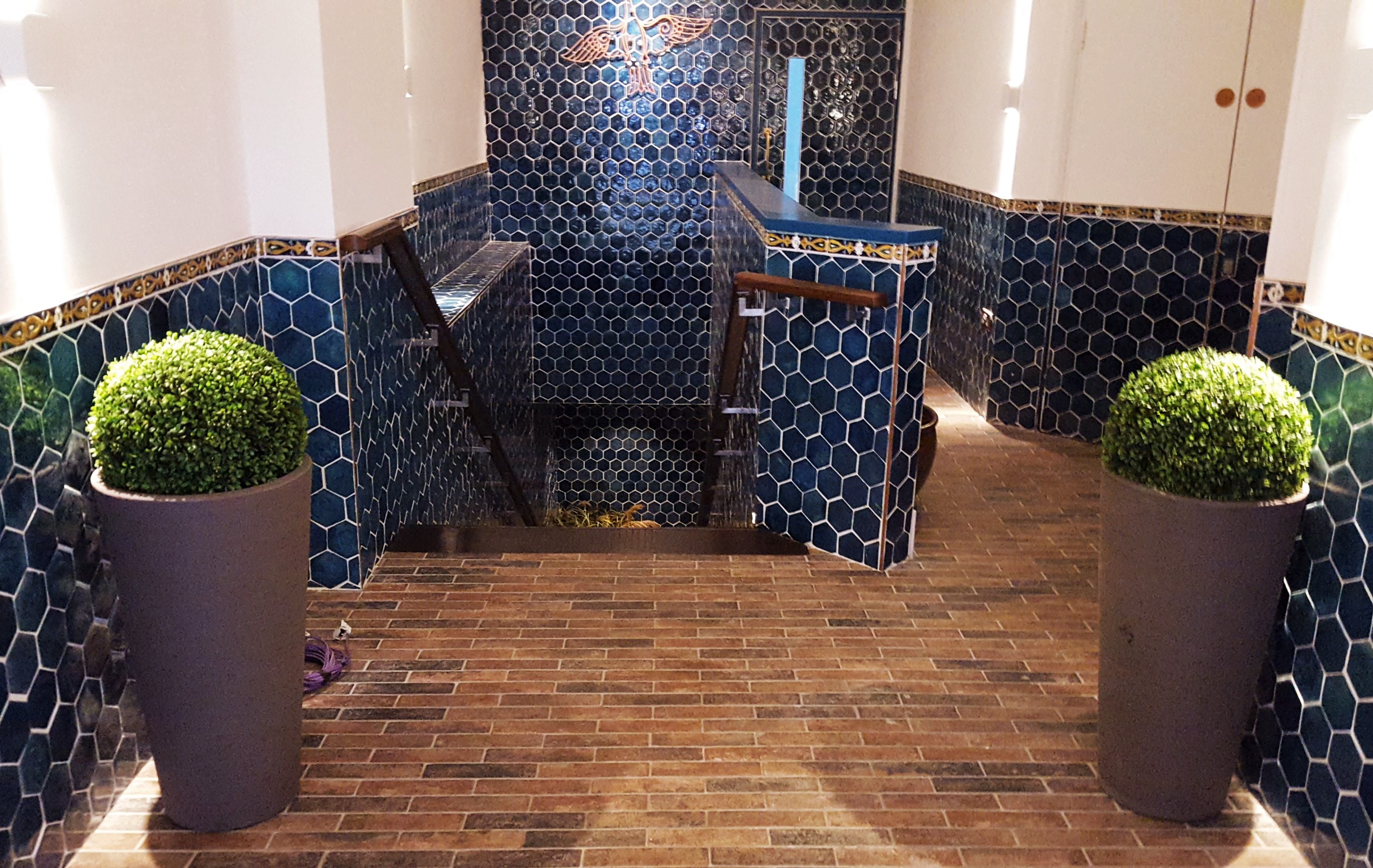 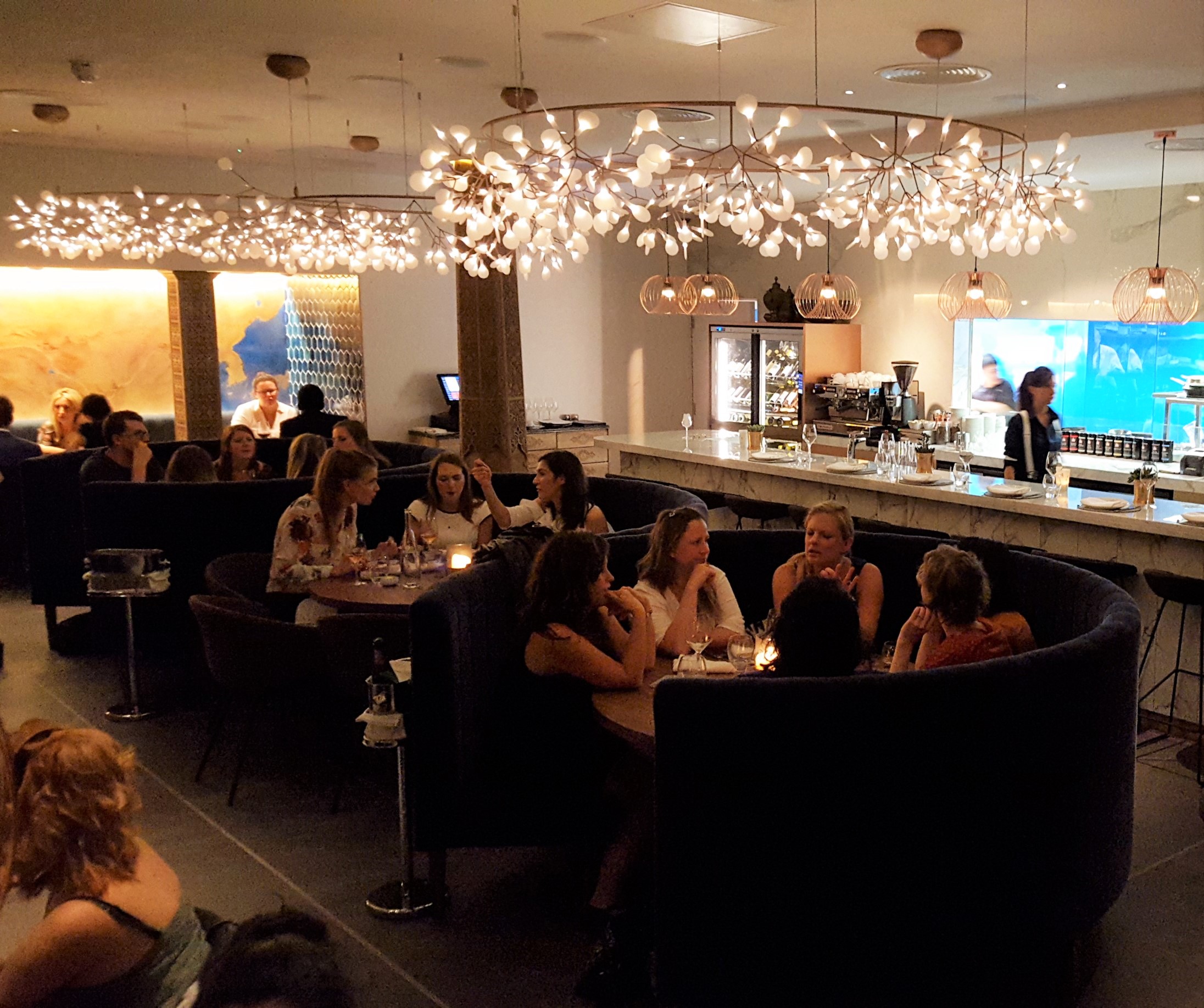 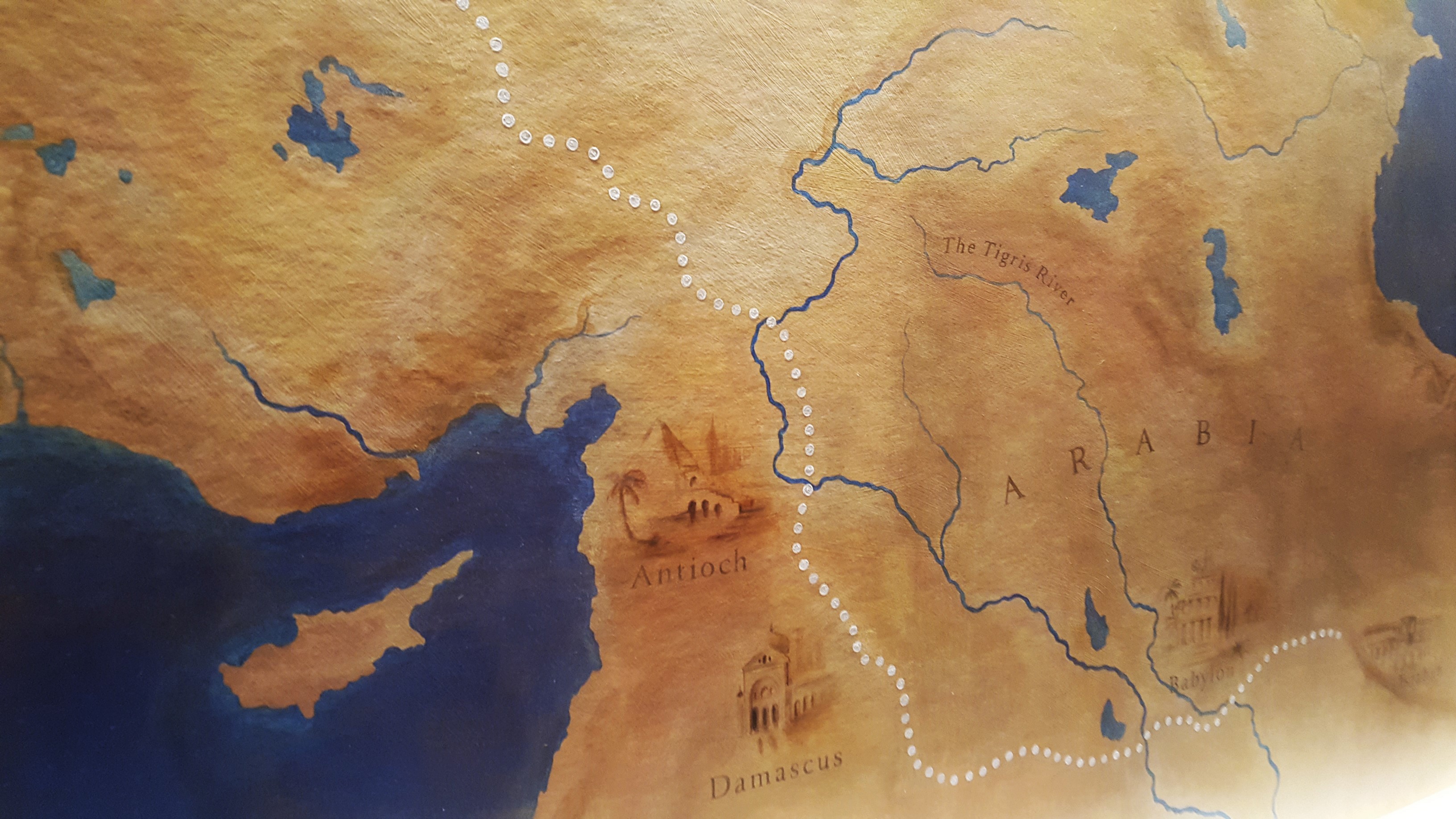 Ambiance and decor: The entrance is just off Charlotte Street and gives absolutely no indication of the splendour to follow when the doors are closed. As you walk past these light grey doors and the deep blue hexagonal tiles with gold trims partially covering the walls, you start to get a feel for the lavish decor and eagerly anticipate what’s in store beneath your feet. I felt as though we were descending into an exotic Turkish hammam, the candlelit reception and terracotta pots contributing to this effect. The spell is broken as the space opens out and white petal-shaped lights and golden wiry fittings hang like halos and crowns above marble and wooden tabletops. A hand-painted map of the region stretches out across the wall adjacent to the semi-open kitchen, where the bright blue background is reminiscent of the sea. Samarkand Blogger Review

Service: The hostess gave us a warm welcome, which was continued by our waiter, Dmitri. He happily re-seated us in the alcove on request; our table was behind a post, thus restricting our view of the kitchen and room, making me feel a bit claustrophobic. Once we’d settled into our new spot, he walked us through the menu and advised us on the highlights, transferring his enthusiasm to us along the way. While this was also true of most of the waiters, some were less fluent in customer service, openly admitting they should’ve poured water in my glass first instead of my husband’s and taking their time to wipe up spillages. Samarkand Blogger Review 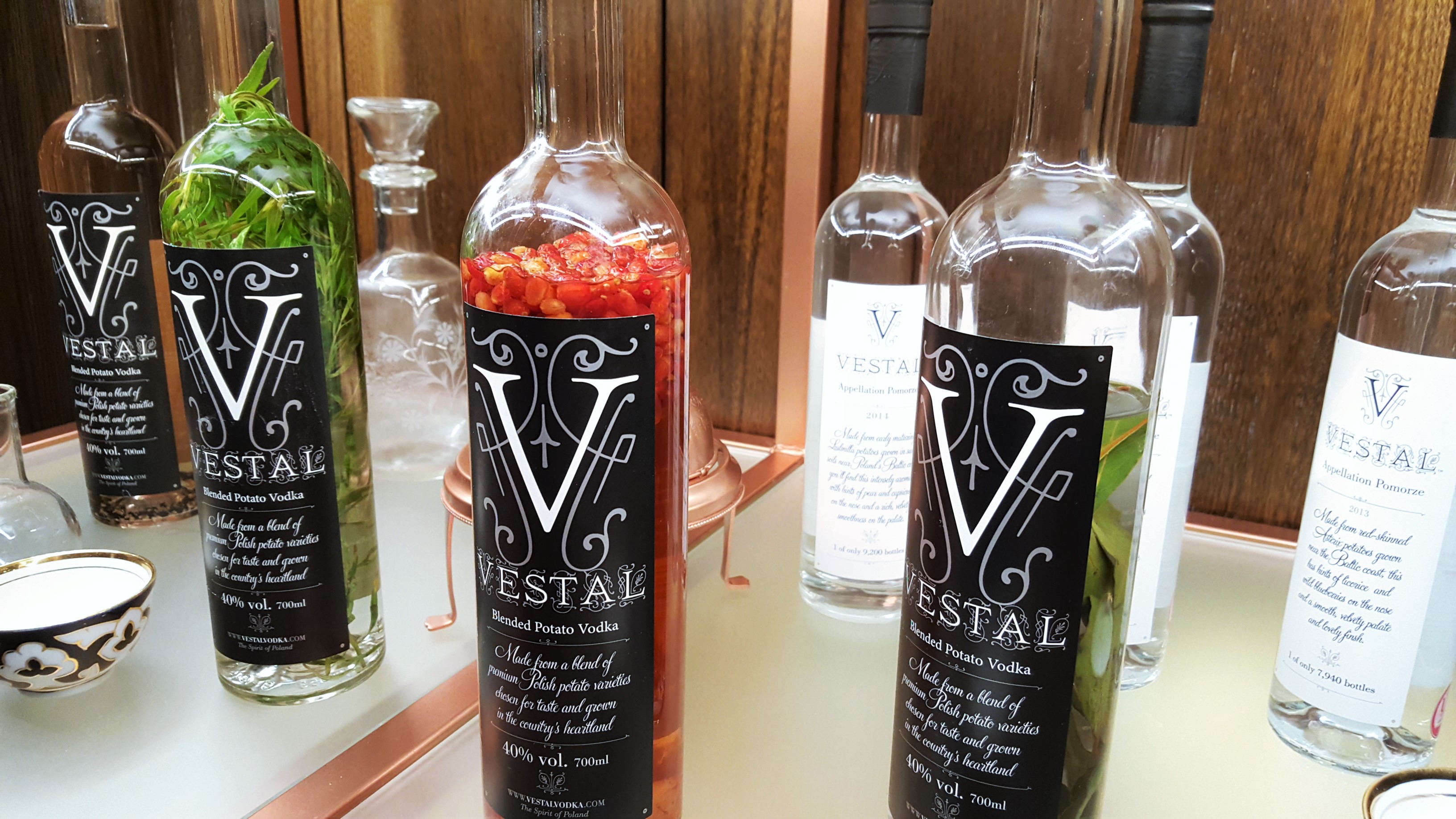 Food and drink:  In a bid to look our best on our upcoming holiday, CS and I have decided to avoid all alcohol for a month. This is easier said than done, especially in summer with spontaneous pub outings, BBQs and weddings. Despite boasting a fully-loaded vodka bar with Polish, Russian, French, Scottish and American varieties and concocting their own on site (tarragon, pepper and rose to name a few), we stuck to our guns and asked the barmen to create a mocktail that was heavy on flavour yet light on sugar. The resulting mixed berry mojito was surprisingly successful, with the sweetness coming from the crushed fruit instead of calorific syrups. Samarkand Blogger Review

Wanting to meet the man behind the mocktail, I headed over to the bar where manager Fabio introduced me to the current vodka selection and explained the flavours are influenced by those in the kitchen. When devising drinks to be enjoyed with the food, he aims to complement the dishes and drew a parallel with Chef Rémi in the foodie film Ratatouille, bringing together contrasting tastes in perfect harmony. Samarkand Blogger Review 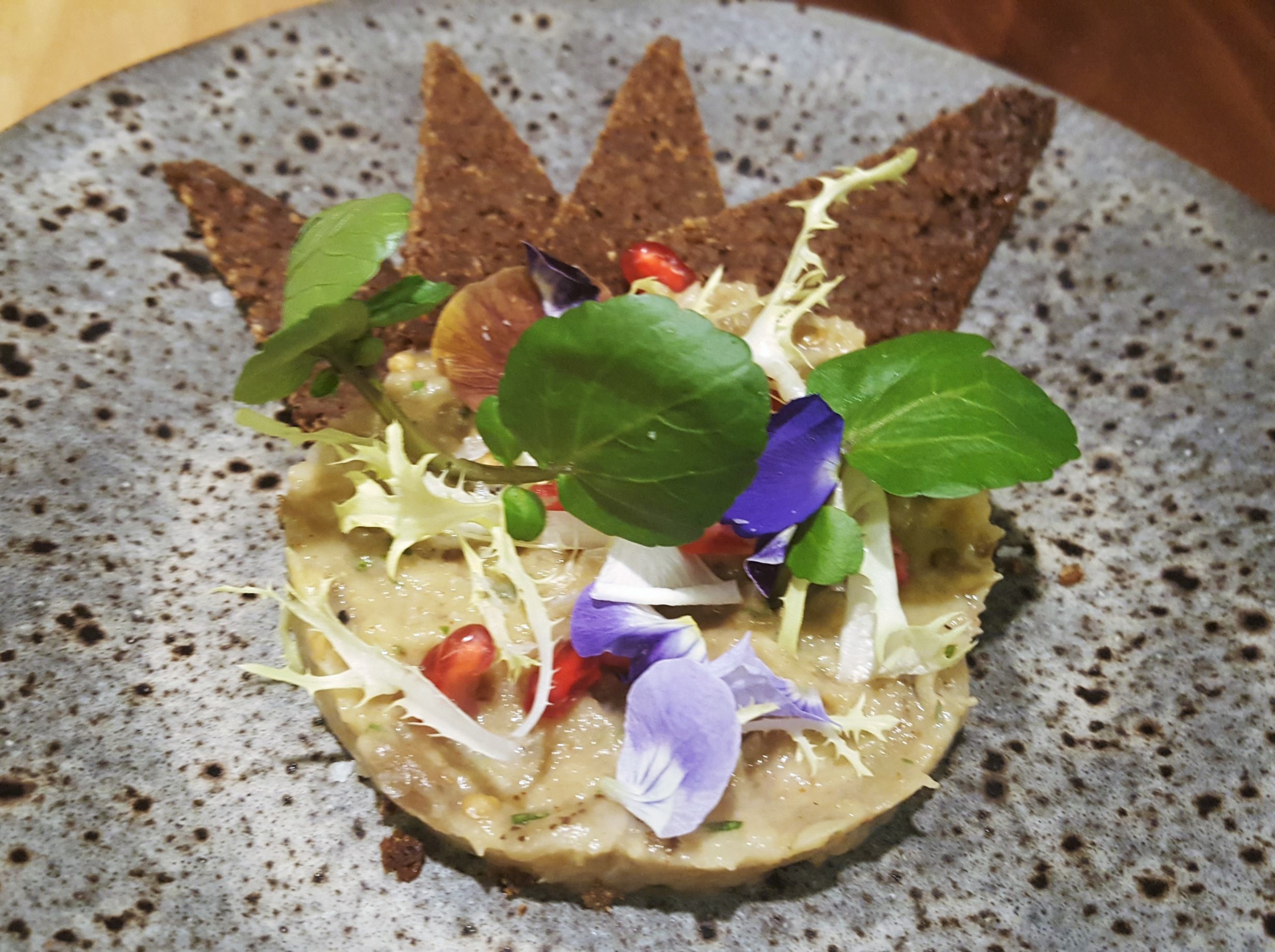 Our starters arrived as our stomachs begged to be fed. The aforementioned Baklajon is smoked aubergine caviar accompanied by pumpernickel crispbreads. It was a pleasant dish, although I prefer the aubergine and smoky notes to be more intense. As much as I love pumpernickel, I felt that it was competing with the caviar and ultimately dominated it. I would’ve liked a few more crisps to scoop up the aubergine as well. CS commented on the haphazard seasoning given the use of rock salt post-plating. Samarkand Blogger Review 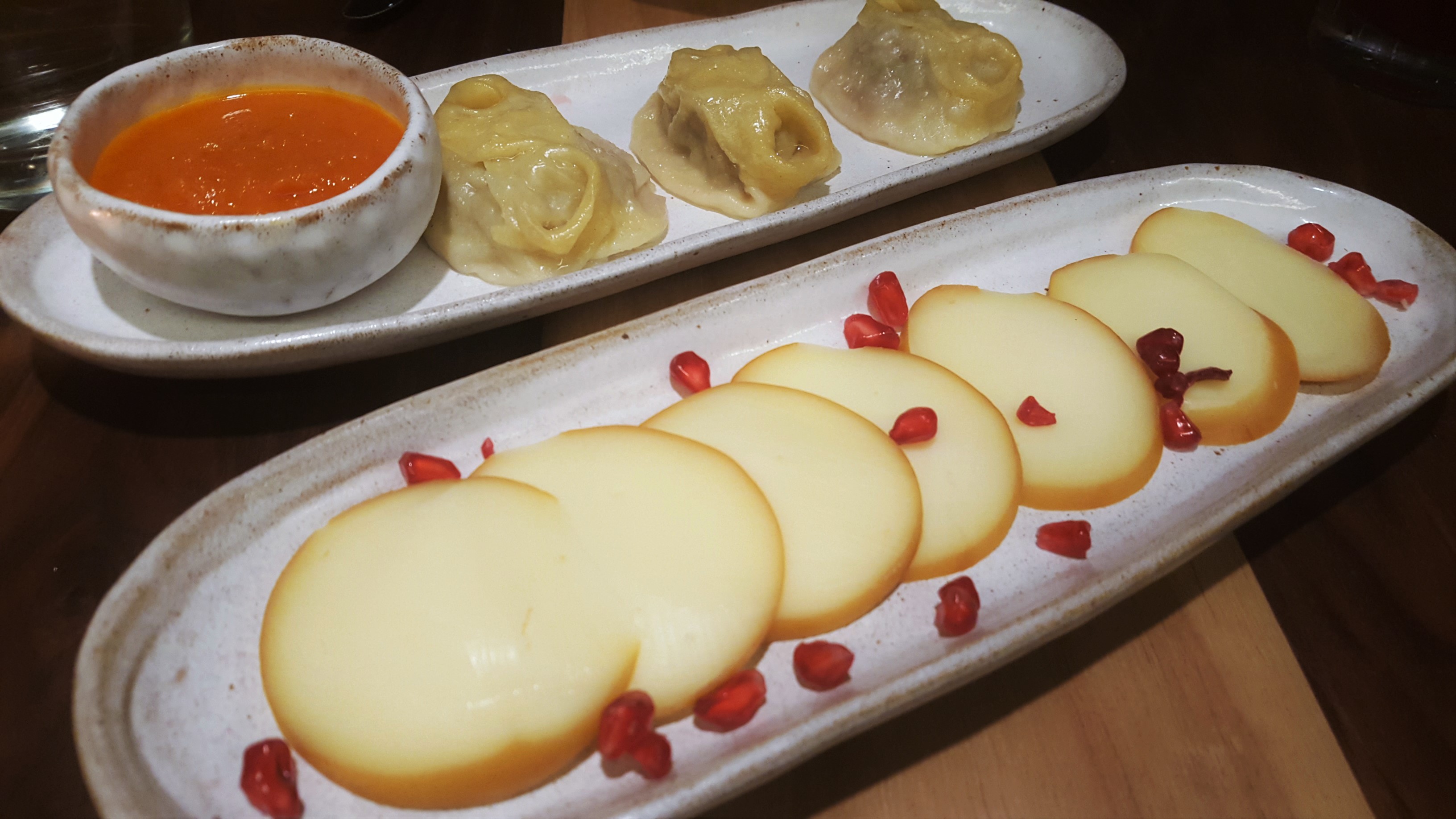 Then came the beef and lamp Manti aka dumplings. Unlike the soft Italian-style pasta, the Uzbek casing is tougher and might not be to everyone’s liking. It stood up well against the meaty filling and would’ve fallen short on the flavour front had it not been for the red pepper dip. While I wouldn’t usually order smoked cheese, CS had a craving to satisfy. These oak-smoked slices being nice and simple, I can understand why they were adorned with pomegranate seeds; it was slightly unnecessary, though. Samarkand Blogger Review 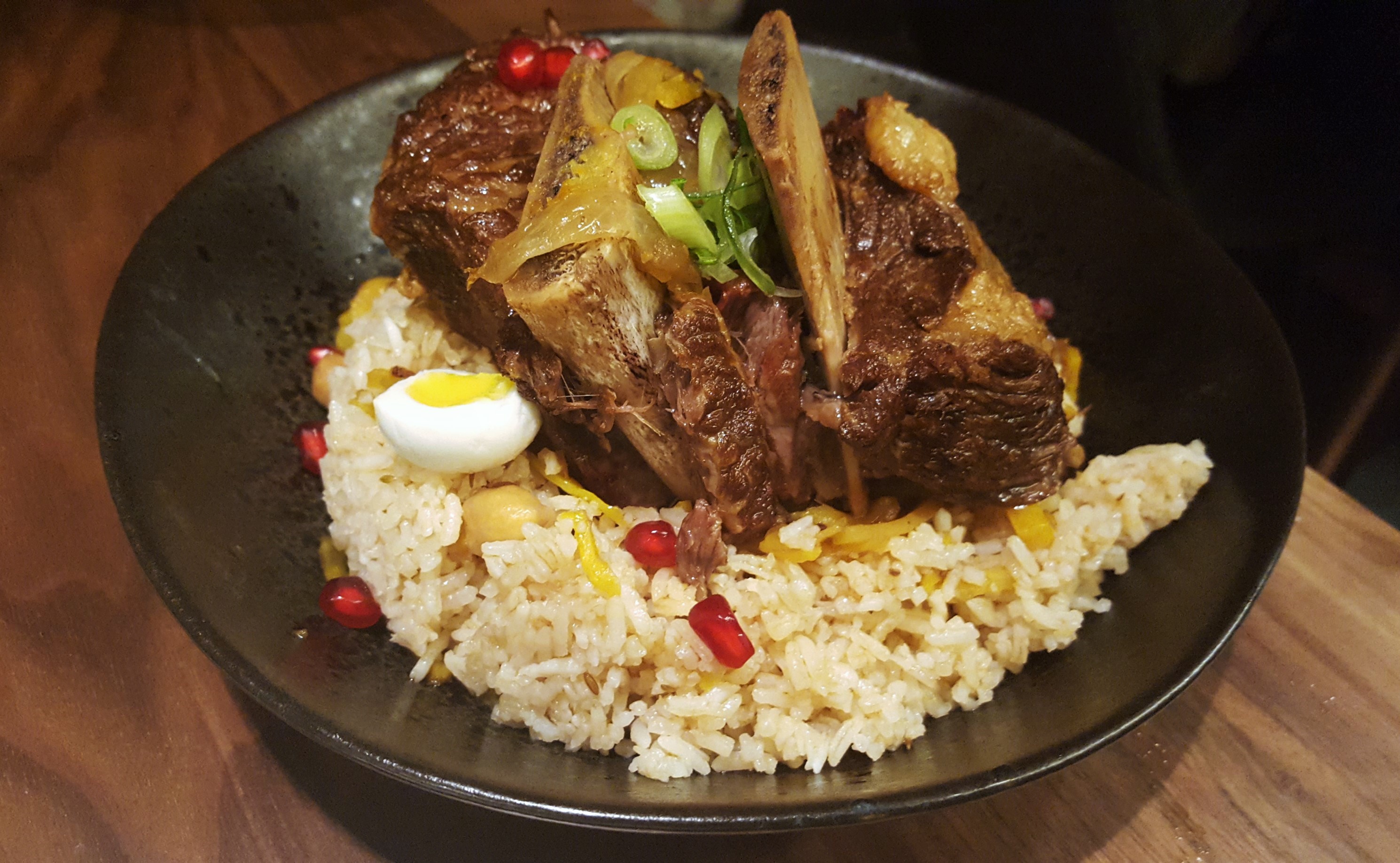 More meat followed for our main in the form of national dish Plov, where beef short ribs are braised for at least four hours with carrots, onions, chickpeas and barberries and covered by lightly spiced rice which seals in and absorbs the delicious aromas. Dmitri told us that tradition dictates only men can cook, serve and consume plov at early morning milestone events such births, marriages and deaths, which piqued our curiosity. Samarkand Blogger Review 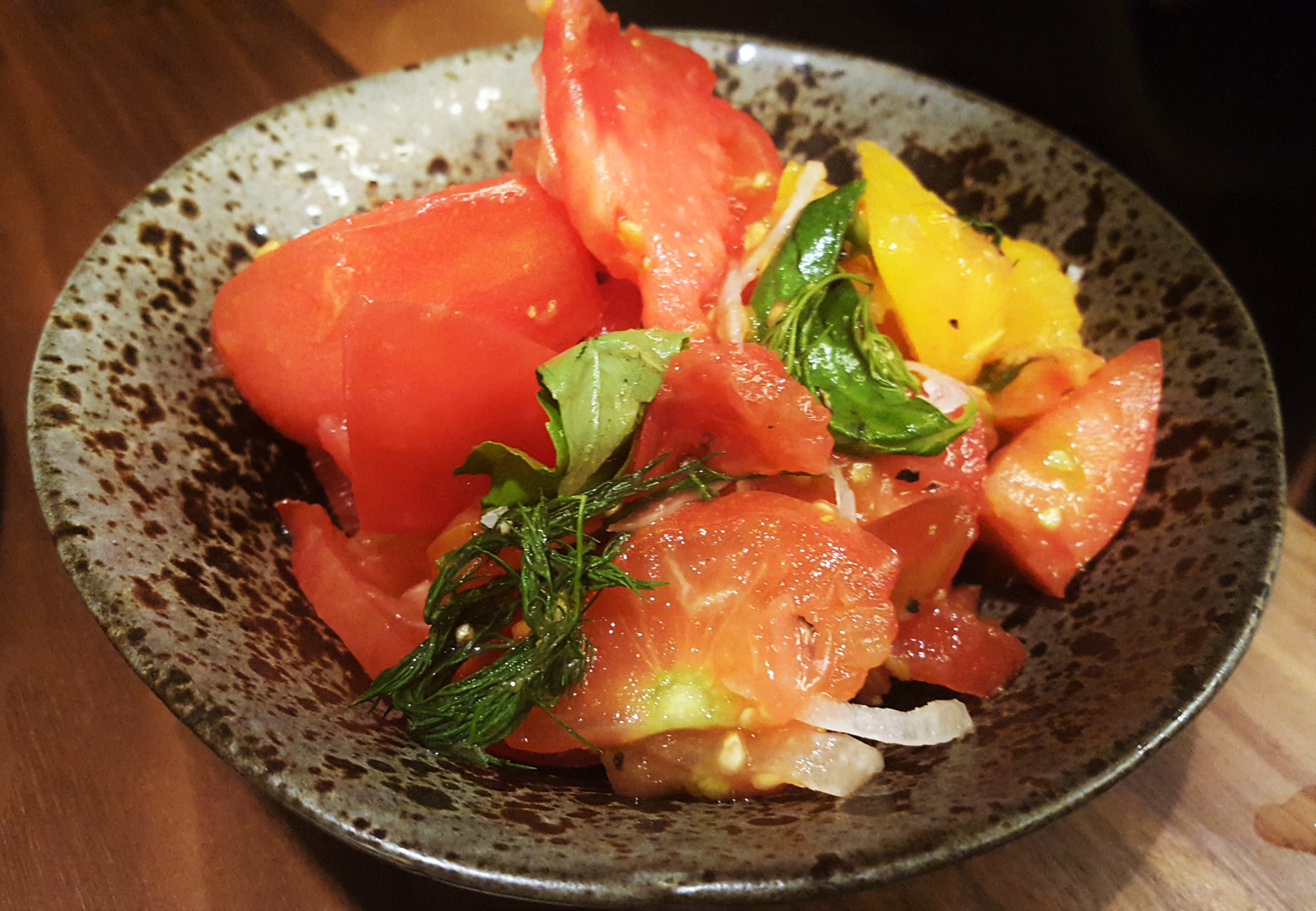 We ordered it with a side of truffled mash, unconcerned about the double portion of carbs, but Dmitri recommended the Archichuk instead: heritage tomatoes tossed with red onions and dill. This was good advice as the fresh tomatoes, crunchy raw onions and herby notes cut through the rich and slightly fatty beef and prevented the dish from being one-dimensional texturally. The beef was barely holding onto the bone and came away at the slightest nudge. Samarkand Blogger Review

We piled our forks high with the comforting carb and topped them with meaty shreds repeatedly until the last grain of rice had disappeared. When we were asked how we liked it, we simply pointed to the empty plates and smiled. Samarkand Blogger Review 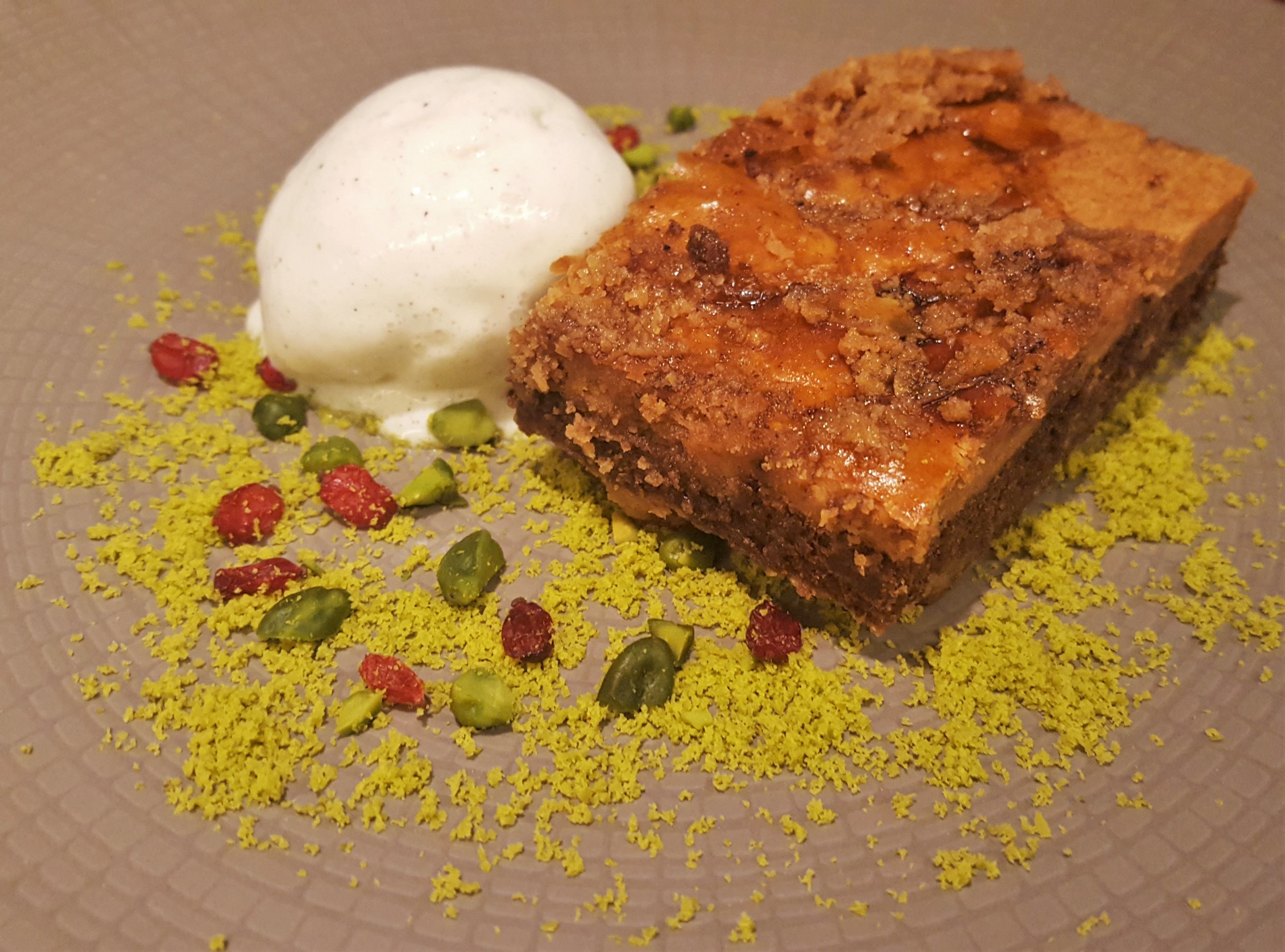 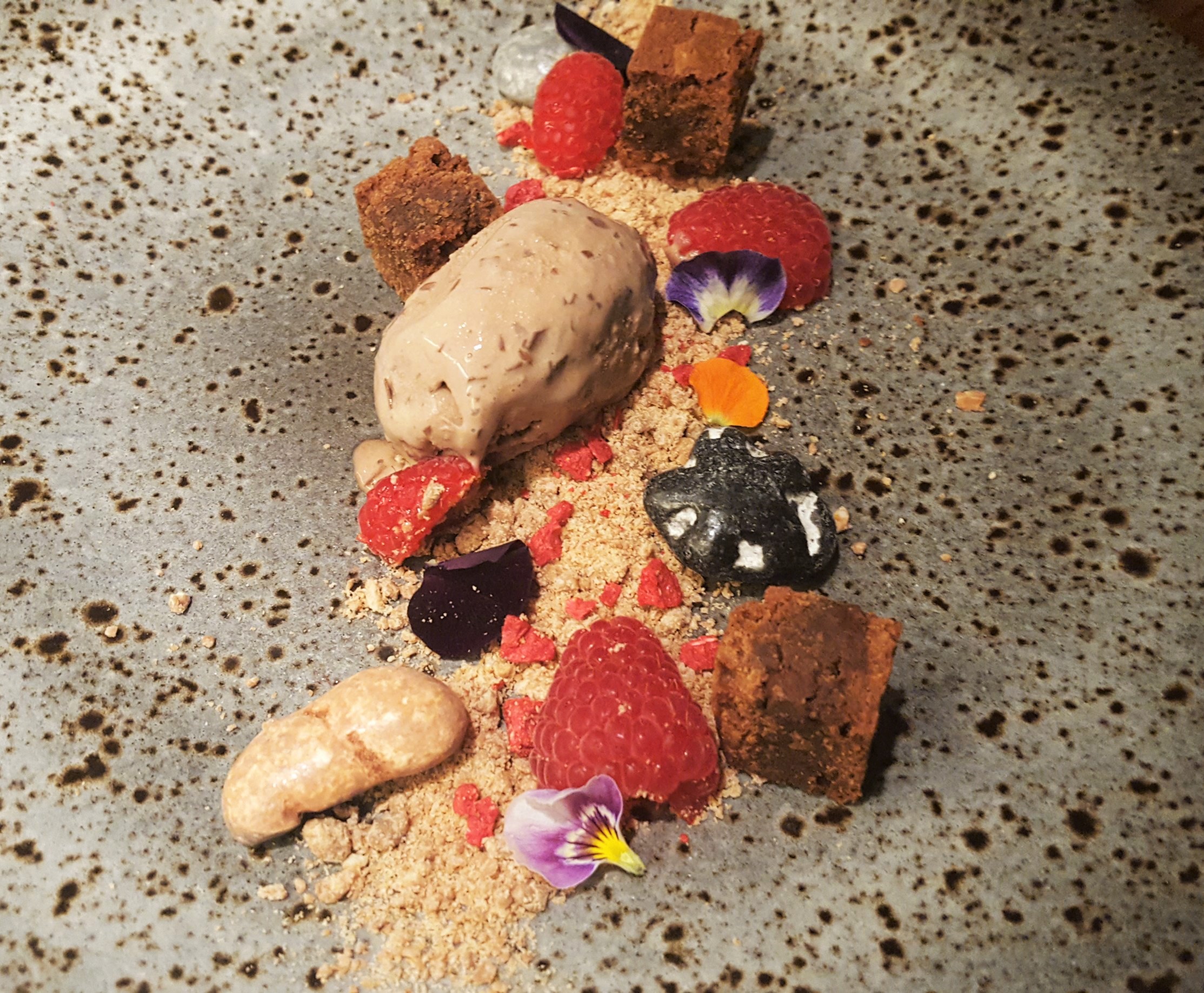 An advocate of #DessertTillWeDie, I’ll always find space for a few mouthfuls of the sweet stuff. In this case, the Baklava Cake and Chocolate Texture spoke to us loud and clear. Strangely, the portion sizes seemed to be a bit skewed, with the former being a large serving and the latter quite small in comparison. That said, both fared well: instead of the usual honey-soaked pastry layers scattered with crushed nuts, the flavours were converted into cake form and served on pistachio dust alongside milk ice cream, whereas the chocolate plate was a decadent trail of brownie cubes, truffles disguised as pebbles and ice cream. I enjoyed the cakey consistency and the pairing of tasty morsels with the plain ice cream, although would’ve struggled to finish it on my own (CS was waiting for me to block his wandering fork and was stunned when the moment never came). Samarkand Blogger Review 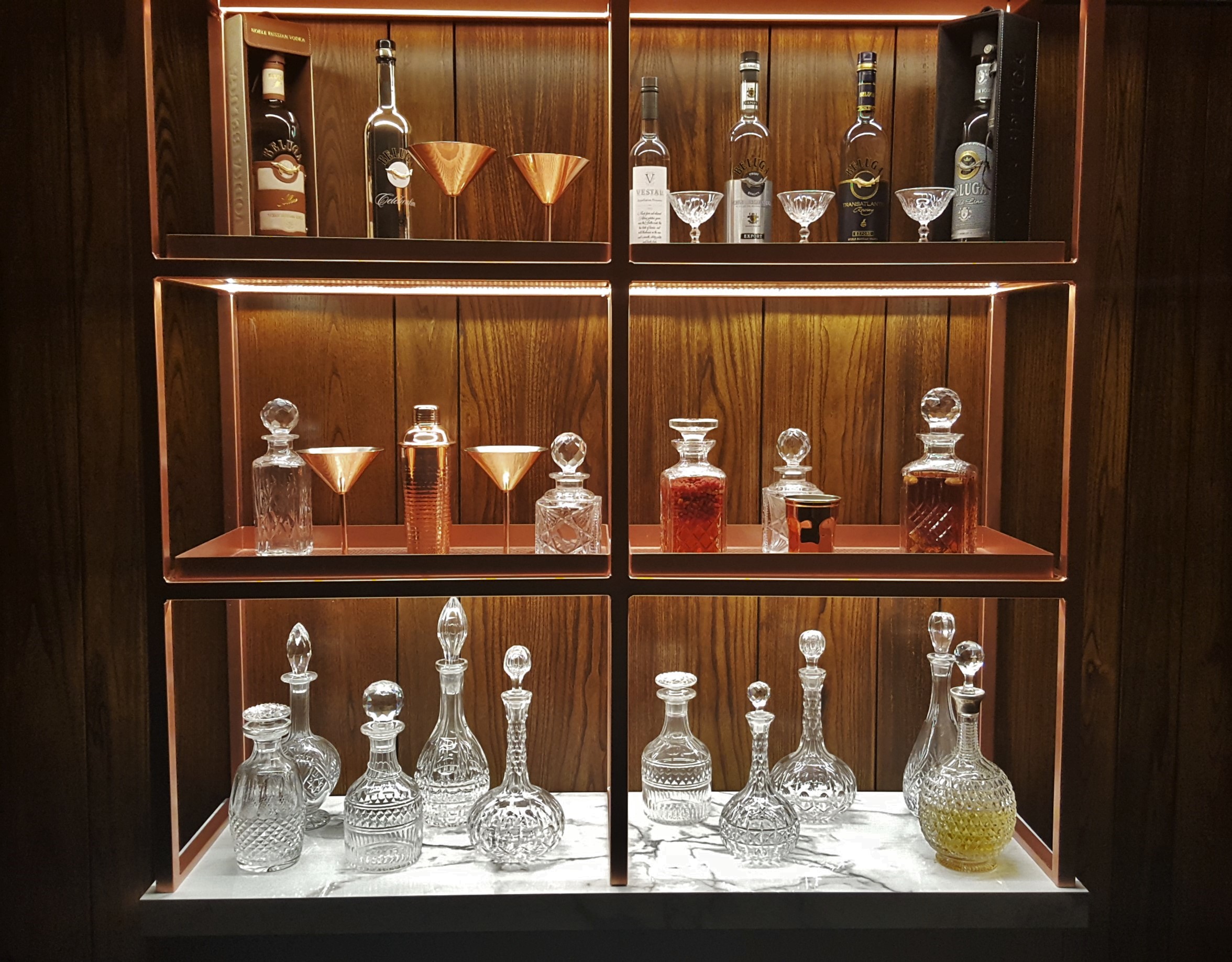 Verdict: Being unfamiliar with Uzbek cuisine, I had no idea what to expect on our visit. The decor made the right first impression, with the service following suit in spite of some minor hiccups. Starters may not have set our palates alight, but the mains and desserts were a marked improvement. It’s a shame I can’t comment on the drinks, which I’ll be back to sample, in particular the coffee vodka used as the base of the espresso martini. Even if the food doesn’t appeal to you, I’m confident that Fabio and his team will whip up a cocktail that’ll leave you wanting more.