When your father is a wine merchant and your mother an excellent cook, a career in food is somewhat inevitable. Having grown up picking fruit and veg from their garden in Norfolk, Tom Aikens knew that he wanted to be a chef from the age of 12. After completing an Advanced Catering Diploma, he worked for several revered chefs in London and France, including Pierre Koffman and Joël Robuchon. In 1996, aged 26, he was back at the helm of Pied à Terre when it retained its second Michelin star, making Aikens the youngest British chef to achieve this feat. Seven years later, Tom Aikens Restaurant opened in Chelsea and gained a rising two-star status by 2008. When it closed in 2016, Tom launched brasserie-style Tom’s Kitchen, which now has five branches: three in London, one in Birmingham and another in Istanbul. I met Tom ahead of the Chelsea relaunch to discuss his new ventures, family and personal growth; this is the second instalment.

You ran six marathons in five days across the Sahara. What did your training schedule entail and how was the experience?

The training was very intense and trying to fit it in was hard. I had a good level of fitness anyway as I think it’s important to look after your body because of the workload [of a chef]. If you don’t keep yourself in shape, then your body will fall apart. I’ve been exercising since I started at Pied à Terre in my mid-20s. When I joined up for that race, I hadn’t run more than three miles. With the help of a trainer, I mapped out what I had to do by Christmas – the race was in April – and just did it.

It’s more mental: your head gives up long before your body. That’s the one thing that determines everything and if you have a strong mind, you’ll just push on through. If you don’t, you’ll give in. I had that drive in me, so I rapidly built up my strength and conditioning. I signed up in October and ran my first marathon in December. By the time I left the UK for this race, my aim was to run a marathon on the Saturday, another one on Sunday, both carrying 12 kilos. I did that two weeks before, so I knew I’d be ready.

The weather conditions are just something you deal with when you’re there: it’s like running in a hairdryer. You do a marathon every day then you do a double marathon in one day as well, so you do 52 miles. My feet got infected and I lost all my toenails; it wasn’t pretty! But I ran the London Marathon a week later. I’ve done some long challenges, but not like the Sahara.

I’ve done lots of cycling races as well. I had a couple of knee operations (at 26 and 35), so I was cycling in-between because I couldn’t run. I raced 220k in the Alps, up and down stupid climbs of three hours. I did the Etape du Tour, a stage of the Tour de France, and these races are anywhere between eight and 11 hours in length, so they’re tough.

If you could abolish one piece of modern technology, what would it be and why?

The mobile phone. I’d love to get rid of it because it controls every aspect of our lives. 15 years ago, we didn’t need them. I guess they’ve become a very valuable communication tool, but I’d like to think we can go back to the days when we didn’t have emails or mobile phones.

What was the best compliment that you have ever received and why was it so meaningful?

I’m not one for flattery. It’s not anything in my career or what I’ve achieved: I feel the most warmth when my partner [Justine Dobbs-Higginson] compliments me. I don’t really care what’s written in the press, if you get a great review, or comments from another chef. When the person you love gives you a compliment, that beats anything.

What have been the best and worst phases of your life and for what reasons?

The best is having kids. The girls have a bit of both my partner and I in their characters, their personalised take on us; it’s so funny. They’re both very different.

As for my career, being at Pied à Terre was amazing, but being in the public eye at an early age was tough. At that time, there weren’t that many restaurants and so fewer people to focus on. But I think being chef is the most exciting, mind-blowing job in terms of what you can create, the travel, the people you meet and the amazing events. However, the sacrifices you make are huge: lack of sleep, unsociable hours, not seeing friends and family. It depends on what you can deal with, because if you go into this field, you miss out on a lot. Some people are willing because they see what they can achieve. I always tell trainees to have a goal: it’s not just a case of, “I’m going to be a chef”. You won’t get anywhere if you don’t have structure.

In which ways are you the same as your childhood self?

How do you feel you have changed as a person over the past decade?

I’m still as focused as ever, but I’ve matured and softened after becoming a father; it gives you a different outlook. I try to juggle as many things as I can at the same time, but it’s done in a curated way; I have more structure to what I’m doing. Trying not to say yes to everything is another thing.

Let’s start with the least – thank God there’s not a huge amount! I find it difficult to say no to things because I’m always willing. I then find myself overdoing it with work. Giving a smaller amount of time to smaller things would be more beneficial.

What I like the most is my fatherly side: I love my family time and being a good father. Seeing your little ones grow up, trying to steer them and mould them into something great, is fun.

If you could have the answer to any question, what would that question be? Why does this matter to you?

I’m intrigued about the future and where we end up. You go through various stages in your life, from finding who you’re going to be or what you want to become to then being there and then you need to know how successful you’ll be. Everyone wants to be a success in their life; it can be the smallest or biggest of things. The ultimate thing for me is being happy. It’s the most important thing in life because if you’re not, everything else is a real drag. So, the question is, “Are you happy?” or “Can you define happiness?” It’s also being with the right person, because having someone who centres you shapes everything else.

It depends on the time in my career. There have been moments where I know people are thinking something when they meet me and they already have a visual picture of who I am, what I stand for; the assumptions are there. That’s always very difficult as it’s not who I truly am. I’m more down to earth now than I was, and I’m very open. As you see from my social media, I like to give people a feel for what I’m doing in my life, be it my personal time with my kids or as a chef. I think it’s nice to be able to give people the real you.

If you enjoyed reading this Tom Aikens interview, check out the first part here, and more exclusive Spotlight on Chefs interviews here. 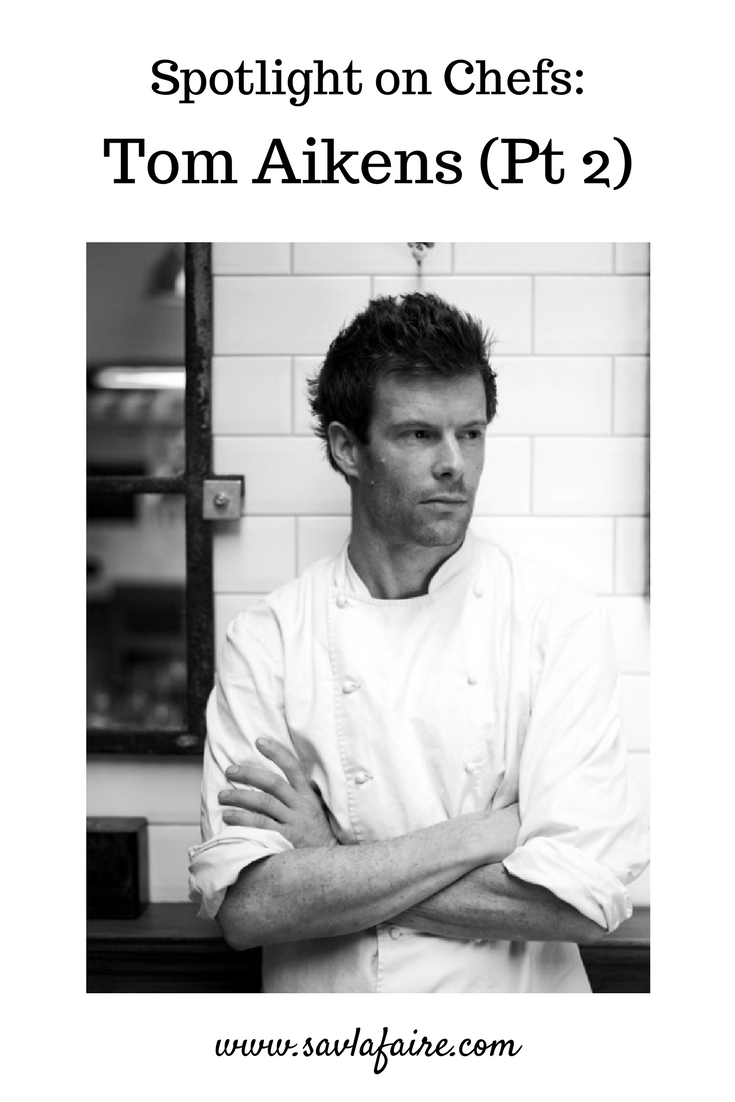