Hailing from the Isle of Man, Colin Clague’s love of food was inspired by his mother, a qualified chef and enthusiastic home cook. On finishing catering college, he moved to London and worked with some of the most influential chefs of the 1980s: Anton Mosimann, Peter Langan, Gary Hollihead and Sir Terence Conran. The 1990s saw him travel extensively before he joined the pre-opening team of the Burj Al Arab in Dubai. Other noteworthy roles include Executive Chef of Zuma (London and Dubai), Jean-Georges and Qbara (both Dubai), and overseeing the opening of The Ivy at the Jumeirah Emirates Towers. His latest venture is the Dubai-based Anatolian concept Rüya; the London branch is based in Mayfair’s Grosvenor Hotel and opened in May. In this interview, I talk to Colin about flaws, football and feedback.

What have been the most challenging aspects of rolling out an UAE concept for the London market?

The London market is very busy, and expectations are very high, so everything has to be perfect. But easily the biggest challenge is back-of-house staffing. There is honestly such a shortage of chefs; it’s ridiculous. Every restaurant in town is short, and the standards just aren’t there anymore. I’ve spoken to colleges and the intakes are massively down. Nobody seems to want to join the industry anymore, and those who do seem to think it’ll be possible to be the next Gordon, Jason or Heston by doing 40 hours a week. God, how times have changed.

What are the biggest cultural differences between the UK and Dubai in your opinion?

Not a lot; we’re still seeing the same dishes being sold in all the restaurants. We also have both regular and Halal meat, as we get lots of guests from the UAE and other Muslim countries. We also have a large Indian clientele, so the vegetarian dishes are flying out the door.

If Rüya went Stateside, how do you think that it would be received by an American clientele?

I think it would be received very well. I really see a market for it; we already have a great number of regular American guests. There are also big communities of Turks and Armenians, so getting quality ingredients wouldn’t be an issue either.

As an Arsenal fan, did it you find it difficult to cheer on an England squad with five Spurs players, or did you focus on the greater good?

I usually follow Ireland, Scotland, Wales, etc., but even I was happy for them and wanted them to go far. Obviously I was a long way from, “It’s coming home, etc.,” but I had reasons to want them to win: all the Spurs players would miss the start of the season, and hopefully give my beloved Arsenal a head start. But the thought of Theresa May and her lot jumping on the bandwagon like they care about football and trying to cover up their ineptitude in running this country because of the success of the English team was just too much to bear.

Which questions do you get asked the most in interviews and which ones do you dislike answering?

“Who are your culinary heroes?” I’ve been lucky enough to work with, and know, some greats, and it’s just too hard to pick one; there are so many inspirational people in the industry.

If you can’t count friends and family as possessions, I would say two things: I think most chefs like watches, and I don’t mean Apple or the like, but proper quality time pieces. I have two which I’m particularly fond of: I got one after doing 10 years at Zuma, and the other from His Highness Sheikh Mohammed of Dubai. He loved what we were doing with Middle Eastern cuisine at Qbara and gave that as a gift to say thank you.

My other treasure is a crystal statue of Dennis Bergkamp. It was the gift that all the players who played in his testimonial at the Emirates received. I know I’ve been accused of running the Arsenal canteen several times, but to get 4 tickets, unlimited food and wine and the statue from the man himself, without having to run around for 90 minutes, is priceless.

Difficult one; I love both politics and comedy. There are so many greats I would love to meet, but I’ll plump for Stan Laurel, who, in my opinion, is the greatest comedian ever. In Australia, I was a member of “Sons of the Desert”, the Laurel & Hardy fan club, (mostly drinks and films). You can see genius in him; a look and I’m in stiches. I still watch all their films, and I’ve even introduced them to the kids; slapstick appeals to any age.

More times than I care to mention. Sometimes it’s just a, “Why didn’t I think of that?” but more often I think I could improve a dish by taking elements of this dish to improve one of mine. You can always learn from your peers. In fact, you can learn from anybody; never stop learning!

With public review sites like TripAdvisor and the increasing popularity of bloggers, everyone is a critic. How do you respond to any negative feedback?

You have to be strong in this game. Of course you’ll have negative feedback, and as you said everybody is a critic. To be honest, I really don’t read anything on TripAdvisor or similar. If you haven’t enjoyed something, please say it in the restaurant, where we’ll bend over backwards to make it right. Waiting till you get home to have your penny’s worth is a bit shallow, cowardly and faceless. But what makes it OK is when your peers come in, the people you look up to. I’ve had many of the best chefs in the business coming into Rüya and they’re extremely complimentary. They always have pointers which you take on board as they’ve been there, done that, and stood where you’re standing. If I can make them happy, that’s good enough for me.

The music I’d love to relive would be the whole late 70’s-80’s genre. The music from ska, 2 tone, punk and so on had meaning; the lyrics had something to say. Living in London at the time was fantastic, as you got to see them live.

I don’t need to erase books because if they’re good, I’ll read them time and again. Mmy favourites are Bury my Heart at Wounded Knee by Dee Brown (disturbing, but you can’t put it down) and anything by George Orwell, especially 1984 and Animal Farm.

For films, I wish I didn’t know the plot of Shawshank Redemption.

Well, it would probably be about one of the two things you’re not meant to discuss: religion and politics. I’m passionate about both and it gets me into hot water more often than not.

What lie do you repeatedly tell yourself and for what reason?

“Tomorrow will be easier”, because you would never get up some days if you thought you had to go through that again. It never gets easier.

What would be some of the most annoying things about having yourself as a roommate?

You should ask the wife! I’m quite sure that any person married to a chef has a list as long as your arm about annoying habits, apart from the usual coming in at unsociable hours, stinking of food and sweat (even I don’t like getting into the car with myself after a 16-hour shift), not being able to go straight to sleep as you’re still buzzing from service, wanting to chat at 2am, never being at home, i.e. being classed as a roommate, etc.

When have you felt your biggest adrenaline rush?

If you’re talking about in the industry and not watching the Arsenal, it’d have to be either the first day of Sir Terence Conran’s Mezzo in Wardour street. We had practised doing about doing 120 [covers] on each of the two floors and probably let in over 400 on each floor; it was pandemonium.

The other time was at Qbara in Dubai. It was a dry night, so no alcohol could be served, meaning they’re very quiet nights usually. Usually. I closed the upstairs kitchen and sent three quarters of the chefs home. We then did over 180. To say the air was colourful that night would be an understatement. Needless to say, I never send chefs home early on dry nights now.

If you enjoyed reading this Colin Clague interview, you can check out more exclusive Spotlight on Chefs interviews here. 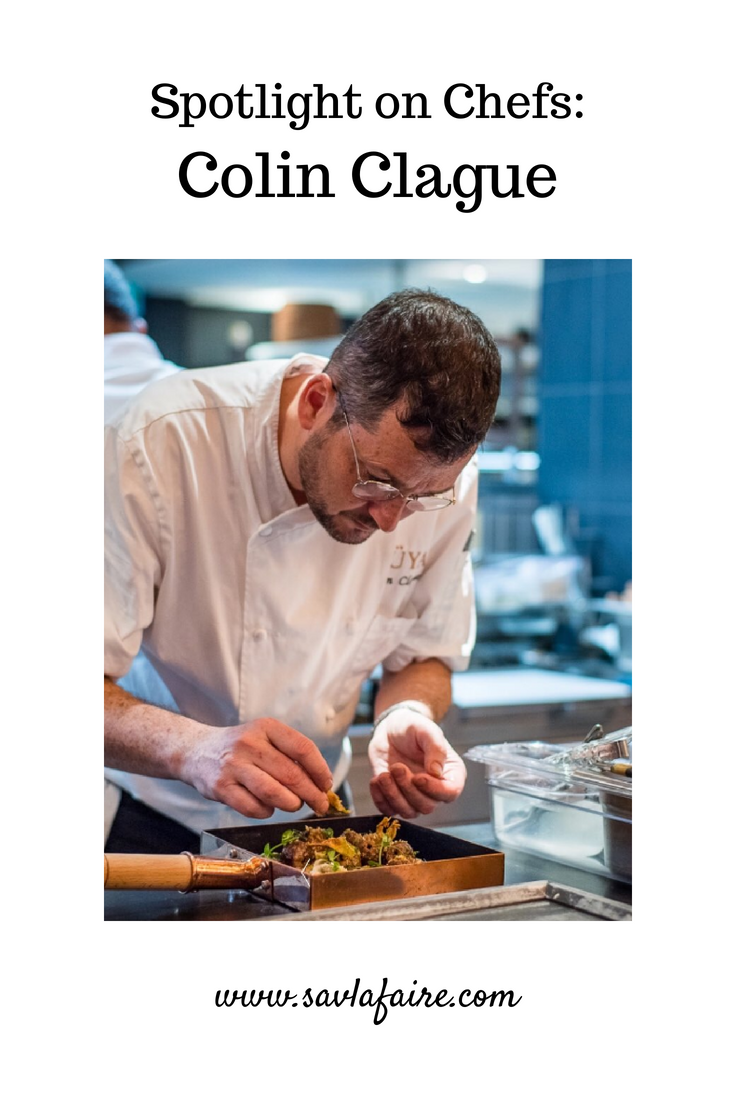