You could say that Anna Hansen stumbled into the hospitality industry. Born to a Danish mother and Belgian-Swiss father in Canada and raised in New Zealand, she studied business management before upping sticks and moving to London aged 22. Unsure of her next move, she accepted a dishwasher job at the French House Dining Room in Soho. There, she was trained by owners Fergus and Margot Henderson and swiftly rose through the ranks to become head chef. Almost a decade later, she partnered with Peter Gordon at The Providores and Tapa Room before launching her solo venture, The Modern Pantry, in Clerkenwell in 2005. A second branch in Finsbury Square followed seven years later and the brand continues to go from strength to strength.

You’ve previously said that you’re more confident now that you’re in your 40s. What advice would you give to your younger self if you could, both professionally and personally?

I think I would advise the former me to be a little more kind to myself and to trust my instincts.  I spent way too much time filled with self-doubt and feeling like a fraud!

Diners taking photos and videos of their meal to share on social media platforms and blogs is very common nowadays. How do you feel about this modern-day obsession?

I don’t mind at all, in fact it’s quite flattering, although sometimes the shots make the food look truly awful. On the other hand, some of them are truly beautiful, so I have learned to take the good with the bad!

I feel as though people just take everything for granted these days and judge the value of a meal based only on what they think is in front of them and an expectation that they should be able to eat scallops and fine meats for the price of a mackerel pate or chuck steak. Little thought is given to the provenance of the food and beverages (quality produce costs money), the fact that they are sitting in a lovely space inside an elegant building, waited on by human beings, cooked for by human beings, using linen napkins, lovely cutlery, etc. I’m tired of people talking about value for money when they have almost no understanding of what that actually is (and especially at a time when we are all watching our grocery and utility bills rise.)

Your Twitter handle is @sugarcuredprawn. What does this pseudonym mean to you?

Sugar cured prawn is the name of my signature dish at The Modern Pantry. When I was signing up to Twitter, a friend suggested it and I thought it made sense.

You’re a big advocate of incorporating spices in your dishes at The Modern Pantry. Do you take inspiration from any particular regions of the world, or do you enjoy experimenting with them all?

The best thing about the style of food I cook is that I’m able to utilize ingredients from across the globe, taking inspiration from everywhere. My food really reflects this: a single dish may contain influences from Japan, India, America and France, for example.

How do you feel about culinary apparatus such as the Thermomix, which may encourage people to produce their own food more, but streamline the actual processes of cooking?

I think they’re great! I’m very happy with the idea of people cooking at home more. It’s a very therapeutic process, and if a Thermomix or a Vitamix helps them do a better job, then all the better.

Who would form part of your fantasy brigade and what do these individuals bring to the table for you?

It would be Ravinder Bhogal [Jikoni] for her punchy flavours and buoyant personality, Nieves Barragán Mohacho [Barrafina] for the wonderful way she has with meat, Claire Clark [former pastry chef at The Ritz, Claridges, Bluebird] for her zany style and awesome desserts, and Sarah Conway [Ponsonby Road Bistro, Auckland] to tell us all what to do!

I think it would be about the increasingly unsustainable nature of the Western diet; we are all conditioned to consume foods both bad for us and the environment. The more I read on the subject, the more urgent I see that it is.

As a proud ambassador for the charity Action Against Hunger, you recently collaborated with nine other London-based chefs to create a memorable menu to raise funds. Why did you choose saffron-pickled potatoes and smoked ricotta to represent The Modern Pantry?

The brief was that it had to have a Persian twist, which I think I achieved with the saffron and the pickle elements. The Italian smoked ricotta and black garlic, British made but originally from Asia, added balance and depth to the dish.

I think it would have to be Northcote Manor: the kitchen setup is amazing; you have outstanding teachers/mentors in Lisa Allen and Nigel; AND you get to participate in their incredible annual event ‘Obsession’, which sees an unbelievable line up of chefs from across the globe pass through their kitchen, leaving inspiration and knowledge as they go.

In an interview with The Guardian in 2014, you mentioned that for many years, your one regret had been “never going on a proper French cookery course and learning the words for things”. What difference do you believe that would’ve made and when did you eventually stop caring about it?

I think it would have generally given me more confidence in the kitchen, but by the time I opened The Modern Pantry, it was no longer an issue, or at least not so much of an issue.

Fergus Henderson has said that he looks out for you at events because you’re “a friendly beacon of joy in a room full of chefs and PR people.” How would you describe your mentor and his wife Margot?

They are a pretty awesome duo for whom I have a lot of love and respect. Incredible mentors and nurturers who are very passionate about what they do and believe in. They are an inspiration.

With public review sites like TripAdvisor and the increasing popularity of bloggers, everyone’s a critic. How do you respond to any negative feedback?

We contact the person who has written the review and ask them to contact us directly so that we can find out exactly what went on for them and then do what we can to make good. Often the person does not contact us, however, which is a little frustrating as we don’t have the opportunity to do that. The most frustrating thing is when someone leaves the restaurant saying they had a great time and then they post negative comments in a review.

Yes, but I can’t remember what it was! I know it was at Tetsuya’s in Sydney in 1999 and I was blown away. A shame I can’t quite put my finger on the dish, but it was so delicate and delicious; flavours that I had never tasted before.

You were awarded an MBE in 2012 for services to the restaurant industry. How has this impacted on your life?

I think a lot of people had trouble believing in what I do because of the style of food I cook. For some, it’s an abomination. I remember Terry Durack [Australian food critic] once published a review saying that fusion cooking shouldn’t even be graced with the term ‘cuisine’. Well, that comment was like a red flag to a bull and instead of deterring me reinforced my desire to succeed.

I think it would be Cate Blanchett because I have a girl crush on her. I’m sure she’s also deeply interesting and entertaining!

What’s your most valuable possession, how did you acquire it and why does it mean so much to you?

A beautiful silver ring my uncle forged for my mother and she then gave it to me. We call it the power ring as it is a beautiful, powerful piece that gives one courage when one wears it. It’s especially meaningful now as he died of pancreatic cancer and when I wear it, I feel as though I’m wearing a piece of him.

If you enjoyed reading this Anna Hansen interview, you can check out more exclusive Spotlight on Chefs interviews here. 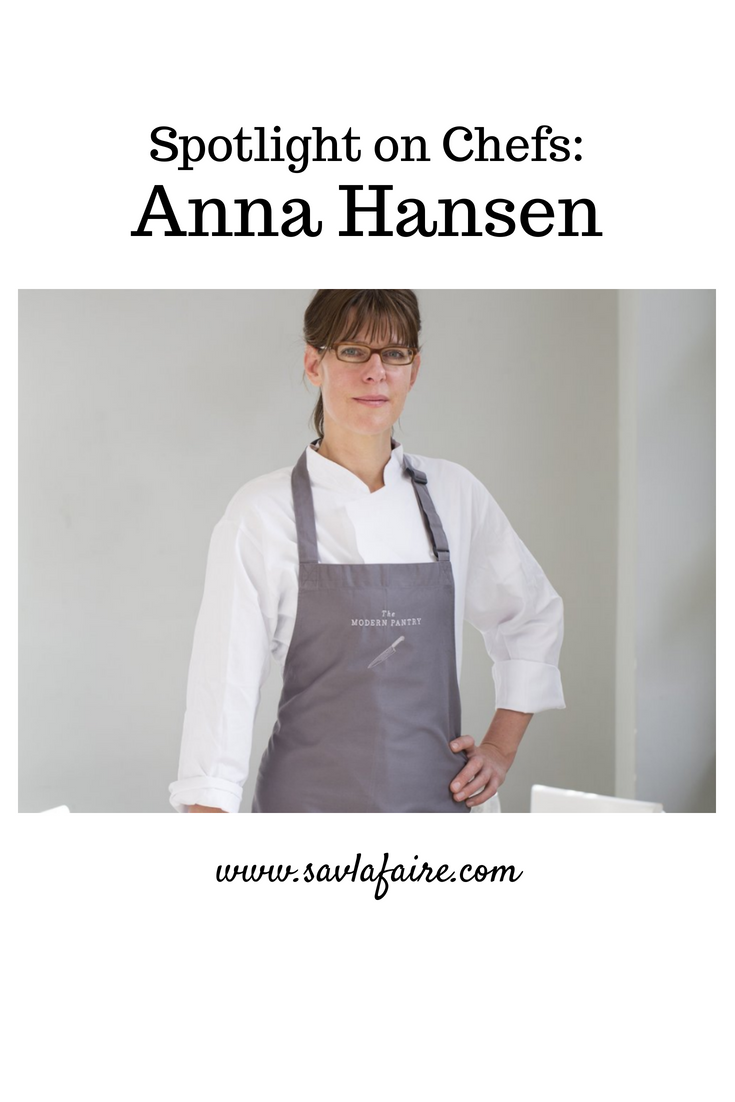